Entrepreneur Ashley Kalinauskas considers Entrepreneur Barbie a friend.
Kalinaukas graduated from ESTEEM in 2013 and became the CEO of Torigen Pharmaceutials, a cancer-fighting pet vaccination startup based on the research of Dr. Mark Suckow and developed in Kalinaukas’ capstone thesis project. Entrepreneur Barbie, in a pink dress accessorized with a tablet, smartphone, and briefcase, is the latest of Mattel’s ubiquitous doll’s more than 150 careers. The doll comes in a choice of four ethnicities.
Entrepreneur Barbie’s recent debut triggered a flurry of Facebook postings among Kalinaukas and her ESTEEM friends. 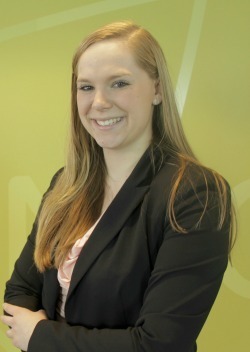 “I guess my first reaction was that it was prettying interesting that they were considering that as a viable career option,” she says. “It would help younger girls think of their future and expand their career choices. On a more though analysis, I don’t see anything wrong with there being the prospect for younger girls to look up to the fact that they can own their own biz. They don’t have to work for someone else. They can own their own business.”

Kalinaukas blazed her own entrepreneurship path in an earlier time (last year) when there were no toys to offer encouragement.

“I didn’t have anyone in my life or any merchandise pushing me that way, but I knew I had a lot of ideas I wanted to expand on,” she says. “I think it was my own intrinsic nature of working really hard to accomplish the goals I want in life, to go down the entrepreneurial path.”

Kalinaukas would consider displaying Entrepreneur Barbie on her desk, and she’s happy her eight-year-old cousin will enjoy the cultural support.
“She looks up to everyone in the family, especially me,” Kalinaukas says. “I think it gives her her an expanded outlook and horizon: ‘You don’t have to be a teacher or a nurse. You can start your own thing and have your own career. It’s another outcome, another thing you can be.’ I think it’s a cool idea. More power to the people at Mattel for considering it.”