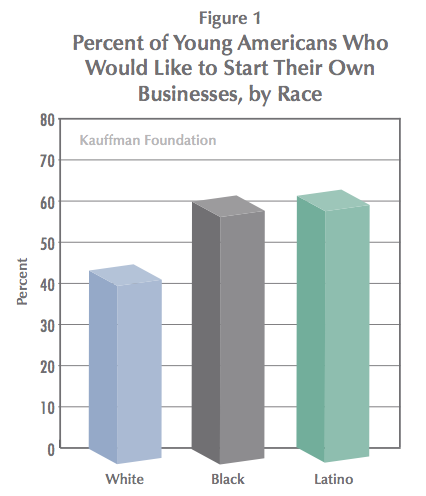 In an economic climate in which young people are feeling the brunt of a high unemployment rate, it’s promising to see that members of the “Millennial” generation are still enthusiastic about starting their own businesses—and none more so than the Latino and African American populations.

A 2011 report from the Kauffman Foundation cites that among young people ages 18-34, over half of 872 individuals surveyed would like to start their own business or have already done so. Among young African Americans, 63 percent say they are interested in entrepreneurship, a healthy percentage likewise shared by Latino respondents as well.

While the study shows that young people are motivated entrepreneurially, they are also seen as wary of diving headfirst into the free market. Only 11 percent wanted to start a business in the next year, while 51 percent want to wait 5 years, and 36 percent longer than that. The economy seems to be the main reason for this, as 52 percent of African Americans cite the recession as a factor, as well as a lack of access to credit and concern with paying off other debts.

Across the board, young people also cite a lack of knowledge and skills required to start and run a small business as an obstacle to their becoming an entrepreneur. African Americans and Latinos especially report having “no real role models to show the way.” These concerns are paramount for any budding small business owner, as successful entrepreneurship requires not only business skills and training but personal guidance and professional mentorships, both of which are cornerstones of the ESTEEM program experience.

While the survey sheds light on both the positive and negative sentiments of young people in the current economy, the real takeaway is in the resilience of young people—especially young people of color—and the enthusiasm they have for getting our country back on track. If you’re among those of the Millennial Generation ready to dig into business and indulge the entrepreneurial spirit, find out how the ESTEEM program can make this happen.