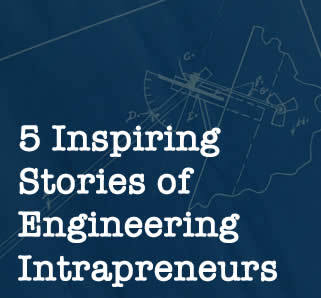 While researching engineering jobs and attempting to acquire a professional position within a technology or engineering based company or organization, it is easy to think that not “striking out on your own” will lead one to have their entrepreneurial spirit or willingness to take risks and innovate not recognized.

This is not the case, however, as one can see through multiple examples of those holding engineering jobs taking risks and innovating all within the context of a larger corporate context.

Here are five inspiring examples from the last 30 years...

The company 3M so believed in the idea of intrapreneurship that they let employees spend up to 15% of their time developing their own ideas. This is how Spencer Silver developed the adhesive that eventually led to the Post-It Note, which made its debut in 1980 and still remain popular to this day in home and offices all over the world.

Kodak, a company known for the majority of its existence as a big player in the world of photography, was looking for a way to make a transition into the digital age near the turn of the century for fear that, if it didn’t, it would slip into irrelevancy and, worse, bankruptcy. Enter the inkjet printer and Cheryl Pohlman working in Kodak’s marketing department, who postured that by selling ink cartridges at nearly 50% the price of Kodak’s rivals, the company could move their new printers at a respectable clip, which they did, selling over 500,000 printers in 2007.

Jim Lynch, a senior electrical engineer at iRobot, hatched the idea for“The Looj,” which is a robot that cleans your gutters, and sold the concept to the company’s higher ups at one of iRobot’s “idea bake-offs.” Though Lynch was tasked with making the project a reality in abbreviated time, so they would be ready for Autumn, he and his team made it work and “The Looj” proved to be a success.

Unimpressed by the sound fx on his daughter’s Nintendo, Ken Kuturagi, who worked at Sony in their sound labs, began developing, as a side venture, a digital chip dedicated to sound that he reasoned would improve the experience of playing games on the Nintendo. While Nintendo wasn’t interested in his passion project, the company he worked for, Sony Computer Entertainment Inc., used this idea as one of the building blocks for the original PlayStation, which ushered in a new era of video games.

In the “The Lean Startup,” Eric Ries shares the story of SnapTax, which is an app that allows you to compile and file most of your taxes simply by taking a picture of your W2’s with your phone. As Ries states…

“This is the kind of amazing innovation you’d expect from a new startup. However, the name of this company may surprise you. SnapTax was developed by Intuit, America’s largest producer of finance, tax, and accounting tools for individuals and businesses.”

As you can see, acquiring an engineering or related job at one of these businesses did not hamper these so-called intrapreneurs. They were still able to innovate and take risks.