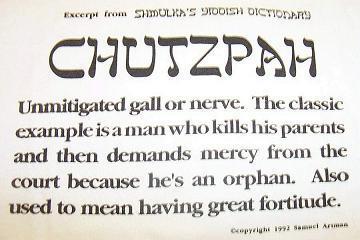 They’re both pretty fun words: charisma with its romantic, appealing charm, chutzpah with the gruff, guttural force to it. And in fact, the aesthetics even reflect exactly what they are—but which is better for business?

These days, apparently, it’s the latter. At Forbes, Maseena Ziegler explains how chutzpah is what’s needed to get ahead in modern Millennial business world, with its twenty-something tech billionaires who seem to have the sociability skills of an Excel spreadsheet.

The upshot: in the fast pace of the modern age, there’s just no time for charm. There are slim opportunities for old-fashioned wooing of the powers-that-be that could make or break you. What it takes now is an audacious sense of daring, the willingness to put yourself out there and make yourself worthy of attention.

Chutzpah is the Yiddish word for just that kind of spirit—though it has a negative cultural connotation in the native language. In the article, Rabbi Tzvi Freeman defines it as “a kind of cosmic attitude, as though there’s nothing really there stopping you from doing whatever you want.” There’s also this anecdote painting it as a sort of shameless gall: “Chutzpah is when a man kills both his parents and begs the court for mercy because he’s an orphan.”

But at heart is a wherewithal to use whatever means or manner required to affect a certain outcome. Ziegler suggests tempering the baser qualities of chutzpah with classic moderation, while Rabbi Freeman suggests a sense of purpose:

“You have to recognize the world is not about you. There is some purpose, something that you and only you are going to have to get done. So chutzpah is the attitude where you say, ‘Nothing is going to stop me from making that happen.’”

The article gives examples of chutzpah at work—from taking on the fashion world to talking smack to Frank Sinatra. If you’re in need of jumpstart on being bold in business and taking risk in making your way, this is a must-read.