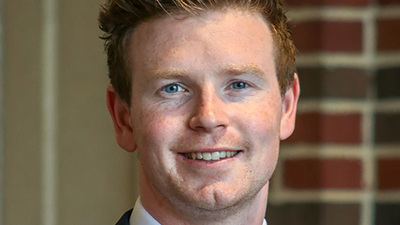 Building ambitious solutions to address big problems without significant prior experience or technical skill set is not uncommon for ESTEEM students and particularly for those who choose to take on a Founder’s Project for their Capstone. How can these students ever hope to succeed at something seemingly impossible you might ask? It is with their passion for crafting impactful startups through human-centered design and their sheer drive in seeing their work through to the very end. Conor Brady (ESTEEM ‘20) is no exception. The grind truly never stops for Brady; even as the academic year officially comes to end and graduation has the majority of us ESTEEMers leaving behind our Capstone Projects and looking towards the next thing, Brady continues to spend hours working on building his product in the hope that he can use the contacts he’s made throughout this year to pitch to interested investors. Even without a formal background in finance, Brady dove headfirst into the FinTech industry through his Founder’s Project called LendingLayer. LendingLayer is a platform which banks can use to collect data shared by companies looking to apply for and secure a loan.

Timing was everything for Brady upon joining the ESTEEM program; wanting to branch out and do something different than a job which had become too comfortable, Brady decided to take advantage of his time in graduate school to start his own company. There was only one issue: he didn’t know exactly what kind of company he wanted it to be. Thinking strategically about how he was going to spend his one year in ESTEEM required Brady to think future-forward from the start. “I was trying to think about 1) what was a problem I was interested in solving and 2) if it didn’t work out that I learned something from this year and could use [this capstone] to pivot my career and go into a different type of role that I wasn’t previously experienced in.”

While Brady had never worked in finance, he knew that this was an area he was interested in learning more about, and ESTEEM provided him with a structure to lean on that typically doesn’t exist for first-time founders. Additionally, Brady was intentional and realistic about the way he approached the Founder's Project and the expectations he established for himself. “Doing something I was interested in, ensuring I would gain something from it and actually solving a problem with a company solution are the three main things that I definitely wanted to achieve. It more than likely is going to fail and if it does have the potential to fail, ideally have it pivot into something that might succeed or you’ll have learned something from it.” This experience has solidified Brady’s desire to work in finance such that he knows even if his project comes to an end he wants to apply for jobs with banks or other financial institutions, potentially in software engineering or product management.

Brady is upfront about the realities of what it means to be a founder. “Prepare for a roller coaster of emotions,” he laughs. He explains, “for me, [the experience of doing a Founder’s Project had some] seriously high highs and low lows. There were individual successes where you get all this feedback and think ‘Wow! They really really liked it.’ And then you see what a competitor is doing and think ‘I just tried for a week to figure this thing out and someone is already doing it.’ Know what you’re getting yourself into from an emotional perspective and also work perspective.” The realization about how best to build his business doesn’t come all at once either. Brady advises, “have some knowledge about what you’re getting yourself into. I had some decent knowledge about what I was getting myself into but I was also doing it to expand my knowledge. I didn’t have a huge financial industry background at all and it took a lot of time to understand what was out there before I could really put together a product that might solve a solution that actually existed in the industry.”

In January, Brady got approval from his ESTEEM advisors to participate in Notre Dame’s Demo Day held in San Francisco where startups can pitch their ideas to Silicon Valley investors. Determined to make the most of his travels, Brady took this opportunity to set up additional meetings with connections who were in the area. “It was really cool and felt like a major milestone had been achieved because you had to come up with some solution you thought would solve the problem and then you’re actually doing the whole Silicon Valley jazz, running around trying to meet people.”

In contrast with his previous industry experience, Brady emphasizes, “I had complete control over what I did and what I had to do; a lot of that was problem driven but at the same time a lot of that was interest driven. When I started to actually build the product it was really interesting to use different tools and source the data that I kinda always had an interest in but never got to touch based on my previous roles.” While Brady is no stranger to working long hours, he discusses how critical it was to learn the soft skills in addition to working hard on the technical ones. “[I developed the] ability to recognize emotional awareness. Really being able to understand people’s motivations in their roles and trying to build a product that would resonate with their pain points and hit them emotionally with something that could potentially transform their career or progression in their role [is important].”

Brady will continue to work on LendingLayer while participating in Race to Revenue, the IDEA Center’s summer accelerator.