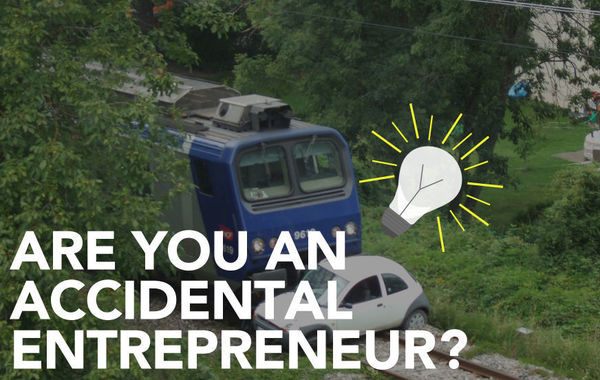 The owner of Threadless, Jake Nickell, didn't know he was starting a business. He won an online t-shirt design competition himself and got so excited he started his own design competition saying he'd be sure to make the design chosen into a shirt or poster. That competition got dozens of entrants and the rest is history. Nickell says, " If I knew what I know now about entrepreneurship, I would have been paralyzed with fear. I may never have started it." Luckily for him and for those of us who love Threadless, he didn't know what entrepreneurship was all about, the stresses and pressures only pushed him toward action. The action also forced him to make a lot of promises that he wasn't willing to let himself not keep. He said, "by taking that first, very public step, even asking others to contribute to it, I was forced to figure it out."

This is how many folks start their own business, by kind of accidentally falling into it. Some successful businesses start by one person working freelance until they get too many clients that they have to hire people to help in the lifestyle business fashion. Many startups start as side projects that spin out of control. Think Twitter and Facebook, the founders had an idea and simply went for it without thought of monetizing and they had to figure it out as they went along. Eventually they found the right partners who helped them get to the place they are now but they started out and accidentally got big.

This is not to say that plans aren't necessary, but it should show that weird things happen - the business you are thinking about right now might not take off but something else you're thinking about might. Or, the business you are working on right now might not look anything like it looks now in the future if you're willing to drop plans. Taking Facebook again, they were essentially a "hot or not" site comparing people from different houses at Harvard, which is nothing like the product that we all spend way too much time on. They were willing to completely scrap their accident and pivot to an entirely new product. Twitter did the same thing, Threadless did the same thing, and odds are many of you will do the same thing.

Are you a planner or an accidental entrepreneur?