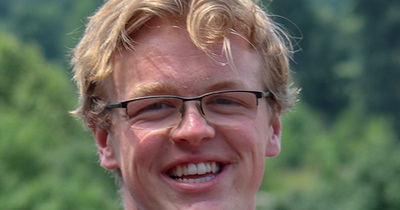 Rian Mc Donnell, who earned undergraduate and master’s degrees in Mechanical & Manufacturing Engineering at Trinity College, Dublin, came to ESTEEM in 2019 already eager to move his idea for slashing food waste in fast-food restaurants and cafeterias to market. He chose ESTEEM because he needed the business and entrepreneurial expertise missing from his engineering education.

While he completed his capstone with Underwriters Laboratories on using artificial intelligence and machine learning in healthcare, Mc Donnell continued developing his FloWaste concept that applies those tools to the food industry. He reached the semifinals of the McCloskey Business Plan Competition, attracting the attention of 2019 Notre Dame mechanical engineering graduate Elise Weimholt who became a co-founder and now works full-time as CTO for FloWaste.

“Now I’ve recruited a CTO to the company, I can let her stay on the engineering side, and I can run the business side. That’s completely from ESTEEM. Before ESTEEM, I didn’t know anything about how to perform that role.”

The training included how to communicate with non-engineers effectively.

“It’s really being able to get the required information across in an accessible and convincing way,” Mc Donnell says. “Before, it would have definitely been, ‘look at algorithms, look at ML, look at how cool we are’. In reality, no one cares about that. You’ve got to convince them that you know what you’re doing."

“Before ESTEEM, I was hardcore engineering, being a mechanical engineer. I had some good experience in user-centered design, a branch of engineering that tries to put you in the mind of the customer or the user. That gave me a little taste, which led me to apply to ESTEEM. It kind of broadened that horizon of getting into the user’s mind. The one thing I think engineers fall for is thinking about the features instead of the benefits. The user is going to use the thing you’re building.”

FloWaste aims to install cameras in cafeterias and fast-food restaurants to gather data on what people are eating and what they are wasting, information that can guide a company on money-saving decisions from portion sizes to vendor choices. Worldwide, one-third of food winds up thrown away, an often-overlooked damage to the environment – with six times the carbon footprint of the aviation industry – as well as the bottom line.

“It’s a huge, huge problem that’s really silent and not given any consideration,” says Mc Donnell, listing growing, transporting, water usage, water purification, and methane production in landfills among contributors to the carbon footprint. “Everyone needs food, but we don’t need food in the way it’s provided to us, especially in America but everywhere – ‘give the consumer what they want and then give them more in case they want more’ rather than optimize."

“We’re trying to give data to show business that if you did optimize, you would actually save this much amount of money. How do we tie the business financials to this food waste and make everything more sustainable?”

COVID-19 delayed planned pilot programs at a McDonald’s in Chicago and a cafeteria supplier in Europe until the first quarter of next year, but the company is raising a pre-seed round of funding to prepare for the projects. He is in discussion for additional pilots with McDonald’s with the potential of scaling up to offer the service to the chain’s more than 38,000 restaurants.