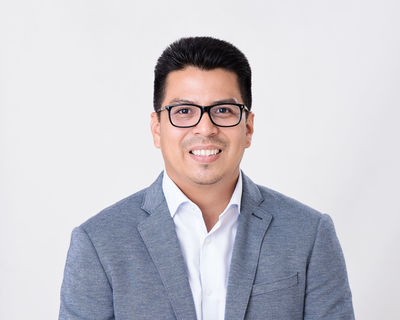 Little did Germán Estrada of Lima, Peru, know when he chose ESTEEM over an MBA program that he was setting a whole new course for his life. Estrada, who had worked for nearly a decade after college in high-level corporate finance in Peru, first for the giant Spanish bank BBVA and then for PwC, returned home in March 2018, nearly a year after he graduated from ESTEEM and now runs the startup 90pct whose app Tínku helps microbusinesses and informal companies navigate the world of finance.

“I thought maybe I should try something different, something that would advance my profile, that gets me the opportunity to have a different view and a second career path after graduation,” recalls Estrada, the only member of his class without a science or engineering background. “I was always very interested in technology. I was very interested in understanding how the mind of an entrepreneur works.”

Estrada’s capstone, sponsored by Wells Fargo, introduced him to blockchain technology with its challenging mathematics, then sent him on customer interviews to prepare human-centered design for a new service that would facilitate sending money from the United States to Mexico and South America. Competing startup money-transfer apps like Venmo were rising, and the bank wanted to make sure it retained customers. Wells Fargo eventually joined other large banks to create Zelle, a shared immediate-transfer technology among all the participants, who before had offered such service only to their own customers. Estrada’s project, “Global Use of Distributed Ledger Technology in Cross Border Payments,” aimed to provide similar service for country-to-country payments, replacing a system with expensive fees in the middle and responding to TransferWise and other entrants in the remittance field. He delivered a sophisticated analysis of various scenarios for value creating with an automated process.

In his spare time, Estrada started working with classmate Eva-Marie Costello conducting research on how people relate to technology that could improve their lives. Interviews revealed a surprising lack of awareness, even among young people and university professors, about effective use of rudimentary calendar, music, and ride-sharing technology. They continued working for months after graduation.

He also started brainstorming with another classmate, Matt Brooks, on ideas to serve small businesses when Estrada got a message for a friend in Peru seeking help with financial management. That sparked a new idea.

“I would really love to help them, but the problem is it’s hard to do consulting remotely if you don’t have the data,” Estrada told Brooks. “It would be very cool if they had the data well organized.” That sounded like an interesting problem to solve. Miguel Becerra, another Peruvian living in the United States and working for a multinational corporation, joined them. The three started collaborating and prototyped a program for small businesses in Michigan and Indiana, where they found mistrust among bankers, business owners, and accountants. 90pct was born, a startup to solve small businesses problems with their finances.

When Estrada and Becerra went home to Lima for Christmas, they asked Brooks to come to visit and explore Peru’s market for a week. The three interviewed businesses and accountants, and their analysis revealed a strong potential market in Peru. “Here in Latin America, some of the most-used softwares are based on the traditional license model – download, pay for a license for a year,” Estrada says. “We saw a big opportunity.” They moved in the spring of 2018; by September, they had a working prototype; in January, 2019 they signed their first customer. The secret, they learned, was providing a benefit to both business owners and accountants who understand who understood the benefits to whom they could refer interested entrepreneurs.

Brooks returned to the States in July. Estrada, who also teaches in a business school, is developing on a new all-mobile prototype app to give microbusinesses and informal businesses. “We want to put this technology in their hands so they can produce data,” he says. “They can make better decisions. They can get access to professional services like accountants. They can have access to the financial market. Microfinance is a market we see as a big opportunity.”

The opportunity to become a powerful force for good is a satisfying outcome of the Notre Dame education, Estrada says: “I was interested in Notre Dame because of the values, the focus on making an impact. I realized it was what I was looking for. At the first moment, I realized I was in the right place. If it weren’t for the program there, I would still be working in finance doing the same, probably with a lot of money but not happy at all. A decision like that can completely change your life. That’s what happened to me.”