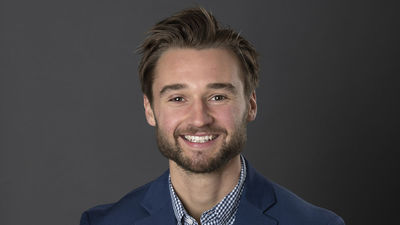 Brady Riesgraf, who always wanted to be a doctor, started mowing lawns when he was a high school sophomore and grew his business to 13 employees before he sold it seven years later. “I didn’t know that was entrepreneurship,” he says. “It was just what I did in the summer. My heart was always on the medical side of things.”

While he was a senior biology major at Saint John’s University in Minnesota, Riesgraf became an Innovation Scholar at the Mayo Clinic, developing intellectual property into a commercial medical device. “I realized that was more of what I wanted to do – not just impacting seven patients in the hospital,” he says. “If I do something that gets commercialized, I can impact thousands or tens of thousands or hundreds of thousands of people.”

One day before graduation, his anatomy and physiology teacher asked Riesgraf to greet ESTEEM Director David Murphy for him at an event on campus. Riesgraf was applying for project management jobs at large medical device companies, but after Murphy’s talk and an extended conversation afterwards, he applied to the program: “I just knew that was what I was going to do.”

Riesgraf conducted a capstone with the Feinstein Institute for Medical Research, a larger-scale version of what he had done at Mayo Clinic. After he graduated in 2018, he worked for Booz Allen Hamilton as a senior consultant on the Innovation Orchestration team. Early last year, he left to join the medical device startup 3Spine. “I liked the fast-paced, dynamic environment of startups,” he says. “When I came on, I was number six. We’re up to 12 now.”

The firm, which is developing the first total joint replacement for the lumbar spine, has been collecting data in the Cayman Islands and expects to launch clinical trials in the United States this summer.

ESTEEM provided the skills and mindset to accelerate his entrepreneurial career, Riesgraf says. “I would have done ESTEEM 10 times over if I could,” he says, adding that he recommends the program to others from Saint John’s. “ESTEEM taught me that you need to get out the building, validate all your stuff with customers, make sure it’s a wanted quantity, and then you go out and make it happen. It taught me how to validate, commercialize, scale, bring in a complementary team. ESTEEM gave me the ability to act, to go out and execute. There are so few people that can go out and say, ‘we have this idea, now we have to make it happen.’”