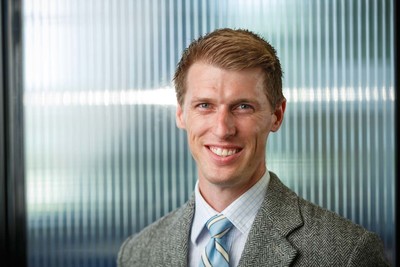 Ben Hoggan no longer sets five-year goals. But his journey, although full of twists and turns, has led him to fruitful places he never expected including the ESTEEM Graduate Program and Notre Dame's IDEA Center.

“I’ve set goals in the past and a new opportunity has always pulled me in a direction I never would have expected,” Hoggan explains. “Now my mindset is, ‘What is the next opportunity?’”

Hoggan, who was born in Utah and grew up California’s Silicon Valley, went back to Utah where he earned a bachelor’s degree in physics, got married, and had two children. His plan then was to get a master’s degree in applied physics and have a laboratory career. While he was working as a technologist in a private mint (a coin manufacturing facility), an unexpected opportunity came in the form of a free application invitation to the ESTEEM program. A personal mentor suggested that the idea of entrepreneurship and innovation felt like a better personal fit than the laboratory career he had been planning.

“I packed up my family and we moved from Utah to Indiana to start the ESTEEM program,” Hoggan says. “I really enjoyed my time at ESTEEM. I came in working on my own technology – a padding structure in football helmets that works the same way your brain does, to reduce concussions. I think because I was working on my own company, it made the program a lot more visceral. I was impressed at the level of mentorship both internal to the program, as well as the outside talent they brought in to advise us.”

After graduation, Hoggan stayed in South Bend and applied the Lean Startup methodologies he leaned in ESTEEM to a subscription airline service model a group of local investors hoped to copy. Using the assumption testing and customer discovery skills he learned in ESTEEM, Hoggan soon concluded that the market was inadequate. He took over operations for the group’s business flipping houses – buying and selling, conducting market analysis, hiring contractors, and sometimes swinging a hammer.

“It was a big transition and not what I expected to be doing,” he says “but it was an opportunity I couldn't pass up…”

One day at an early morning basketball game, Bryan Ritchie, Notre Dame’s vice president and associate provost for innovation, suggested that he consider coming to work at the IDEA Center. Now Hoggan is the Center’s New Ventures & Investments Manager, overseeing the Lean Cohort program that utilizes a customer discovery process to make sure the fascinating technologies coming out of the university are solving problems in the marketplace.”

“I run the whole Lean Cohort program,” he says, “There are a large number of current students, including some from ESTEEM that we utilize to drive the process. We have the teams present each week on the insights they gained from interviewing customers, and make sure we get quality eyes on the problem. We bring in alumni industry advisors to make sure we are making good assumptions and creating ways to test those assumptions against the market.”