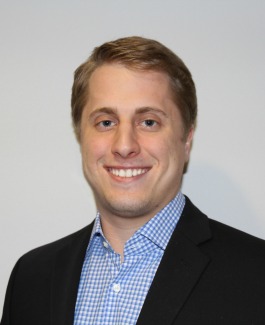 Chris Freise, who graduated with the third ESTEEM class in 2012, kept a copy of his thesis business plan for reference when he got an idea for his own company two years later – a fitness app to solve his own problem of inconsistent access to a gym and an unhealthy reliance on fast food. He learned to pivot from his original plan through real-world experience that has propelled his company, Updown Fitness, to better alignment with market needs.

Freise, who first planned to go to medical school when he was majoring in physics at Notre Dame, decided instead to pursue his entrepreneurial interests at ESTEEM, where his health-related capstone involved developing a business plan to commercialize a technology that targets certain drug-resistant bacteria.

“I always had an inkling that I would enjoy business, especially a startup,” he says. “I   immediately fell in love with it and knew I was passionate about it. I loved learning about startups, all aspects of it, how to create a business, how to run a business. The thesis was extremely helpful in understanding how to put together a business plan and think through all the aspects of the process. I actually referred to the business plan several times when preparing for the business I’m running now.”

When he graduated, Freise went to work as a project manager for Epic Systems of Madison, Wis., where he oversaw the implementation of software at large hospitals while he waited for the chance to start his own company.

“It was a good opportunity to put into practice technology and also practice some of those professional skills I learned through ESTEEM,” Freise says, adding that the job had him on the road about half the time, staying in hotels that might or might not have a gym. “I quickly found it pretty hard to maintain a healthy lifestyle. I was not able to keep up with fitness regimens and started eating not so healthy. I looked for something that could help me manage day-to-day health and fitness. It needed to be really personalized. The fitness apps at the time were pretty generic experiences with the same routines for everyone.”

In October 2014, he decided to solve his own problem – and start Updown to provide the solution to others. His younger brother, Mike Freise, joined the team to oversee product and marketing, and a friend from college, Jes Greenwood, became technical cofounder and CTO. A personal trainer helped create the initial database of exercises.

“After thinking through the business and what this would look like, the team was the first major step toward implementing the business,” Freise says. “I tried to balance everyone’s background and meet all the needs we would have. To me, the most important thing was to find a good technical resource. That’s something that came out of ESTEEM, looking at case studies and other startups. From there, we incorporated the business. We spent the first couple of months doing a lot of customer research, interviews with customers, and developing the initial designs for the product, getting it validated and understanding what the problem is we were trying to solve.”

At first, Updown looked at marketing to companies’ human resources departments for corporate wellness. “We launched initially as a consumer product, an app anyone could download, in December 2015,” Freise says. “We’ve pivoted around a little bit since launching.” In June 2016, the company added a component to integrate directly with gyms. That attracted important gym partners, but the approach did not prove scalable, so Updown decided on another pivot, launched on Jan. 17, 2017.

“We’ve since moved to a platform model,” he says. “Rather than just having a product that integrates with gyms, we can bring in any gym, fitness manufacturer, etc., and they can create a workout and anybody can use it. We’re really excited for it. We’ve seen there’s a big interest certainly on the content creator side, the partner side.” The uploaded videos give partners, including gyms, fitness celebrities, and the top YouTube fitness channel, access to a global market beyond their traditional memberships. Partners specialize in workouts from yoga to strength, stretching and more, and workouts range from 3 minutes to an hour. The app has 50,000 users.

The pivots don’t come easy, but they are essential for success in a dynamic marketplace, Freise says.

“Some people look at pivoting as a bad thing, but I look at it as a good thing,” he says. “When you see a team pivoting, it’s because they understand the market. It’s a very hard thing to do. Everything sounds great and you put together a team and a business plan and all that. You never think about what if this isn’t the best product. At some point, there’s a lot of sleepless nights involved, thinking about it and talking about it. It’s very challenging because you invest so much time and energy and thought into what you’re doing. From that time, you’ve still learned a lot about the market. You’ve learned a lot, period. And that knowledge makes you better as a company.

“It’s not an easy decision to make. It’s even harder to execute on it. I wish I had been more prepared for it at the start. A lot of times, you only see the end result. You don’t see a lot of the trials and tribulations that started in the early days and the pivoting they did to get to the point where they could really build a great product. With this new model, we’re really excited about it. It’s the result of having a product out there and learning the market. We’ve arrived at something that solves the original problem I had.”