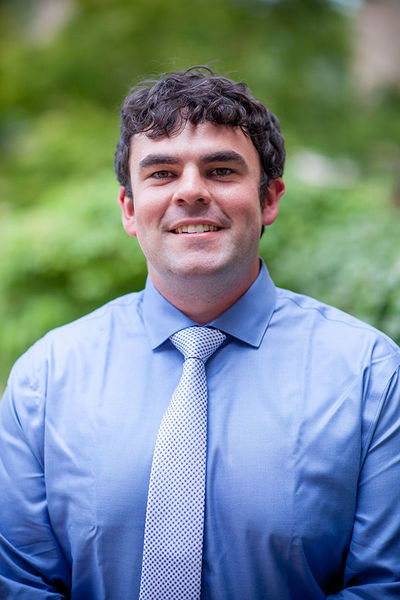 While he was in ESTEEM, Brendan Hughes (’17) was planning to be a “dentist by day, DJ by night.” Instead, he became a globetrotting admissions official for an elite high school by day and owner of a leading-edge craft distillery on the side.

Brendan returned to his hometown, St. Johnsbury in Vermont, as an international recruiter for his historic high school, St. Johnsbury Academy. The school, founded in 1842, started a boarding program in the early 20th century, and 30 percent of its 960 students come from abroad, so Brendan gets to visit classmates in Mexico and China on the job. Then, this past fall, he and his father bought an established distillery, master distiller Duncan Holaday’s Dunc’s Mill, calculating that local craft spirits will follow craft beers as the next big thing.

“The craft distilling market is where craft brewing was 10 years ago,” says Brendan, who leveraged his ESTEEM marketing research skills while conducting due diligence for the purchase. “The evolution for the craft distillery market will hopefully increase. The same selection people have for their beers will be the selection they have for their spirits as well.

“ESTEEM gave me the compass and the map. I did use a lot of those tools to map out what our target market would be. I did a canvass while we were going through the whole process. We’re now in the process of producing and distributing.” The distillery distributes lines of rum to Vermont, Massachusetts, and New York, and expects to expand its offerings.

While his career path took an unexpected turn, Brendan is achieving his plan to give back to his hometown – creating jobs that boost the economy – and the high school that opens its culturally and socioeconomically diverse students to unexpected opportunities in their lives.

“There’s no textbook answer for things people are going to experience in their jobs,” he says. “It’s a great opportunity to learn from so many different walks of life. They allow you to participate in a lot of different things and learn your strengths and weaknesses and learn what you like and don’t like so you can carry that into the next part of your life, whether that’s college or the workforce.

“I have my own stories as well to tell. I can have my own natural experience and my truth of what I experience there. I planned on becoming a dentist, and my route changed a little bit when I came back to town. It kind of fell into place. It’s definitely an exciting time.”