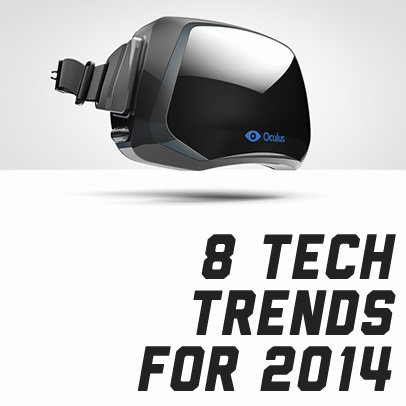 2013 was another busy year in the world of tech and engineering. 2014 promises to contain even more exciting and intriguing developments. Here are some of the stories we think will be big in 2014 and, as you’ll soon see, Google continues to be ever present...

1. Wearable Computing Will be a Lot More Common

A recent New York Times review on smart watches begins by saying, “Every time you look, our computers have moved closer to us.” This doesn’t just mean on our wrists, either. Every day, we move closer to a world where Google Glass moves out of the test phase and onto our heads. With the introduction of the watch-style computer instead of the (much) dorkier Glasses-style, we think that we'll be seeing a lot more of these devices on relatively normal folks.

2. Bitcoin will continue to be a trending story

Sick of talking about Bitcoin? Sorry to say, but we’ll probably all be talking about it more in 2014, at least if one of the Winklevoss twins (of Facebook fame) has anything to say about it. According to Mashable, Cameron Winklevoss “thinks the digital currency might easily become 45 times as valuable as it is today (roughly $900 per bitcoin).” Then again, it could always go the other way too.

3. The world will continue to “get smaller”

While it is cliche to say that the world is getting smaller, it is an inarguable fact. Translation software, like Google Translate, which just added 9 new languages, is making it possible for our global economies and relationships to become even more entwined and interdependent. We're also moving toward live translation utilizing the aforementioned wearble computers -- making communication across cultures incredibly simple.

4. More of our cars will drive themselves

Once again, powerhouse Google seeks to fundamentally change an integral part of our lives. They are not, however, the only ones looking to do so when it comes to the idea of manufacturing a driverless car. Actual auto companies like Mercedes, Audi, and Ford are also racing to perfect the technology. With the original driverless technologies, such as self-parking vehicles, filtering down market to less expensive cars, the next step in the luxury market is the really autonomous auto.

While an unhealthy portion of the 3D printing narrative seems to be framed by the possible propagation of plastic firearms, such a technology promises far more positive possibilities as well. Two German based companies are teaming up to develop a device that will allow you print tiny metal components while, meanwhile, micro manufacturing platforms like the Robox 3D printer continue to make progress.

6. We will finally have actual “virtual reality” gaming

While the idea of “virtual reality” gaming has been on our collective consciousness since the original “Tron” film, most attempts at engineering the concept in the real world have failed, Nintendo’s “Virtual Boy” proving a prime example. The Occulus Rift, on the other hand, seems primed for success.

Don’t have a SmartPhone? Don’t have a mobile version of your website? Prepare to be left behind in the coming year. Looking at this chart from Business Insider, once can see that the number of mobile users will surmount those on their desktops in 2014.

No matter what you think of Edward Snowden, his revelation this year of the scope to which the National Security Administration has been spying on internet users has ignited a firestorm of questions and debate, at least across the internet. As Mr. Snowden is once again in the news, don’t expect the internet privacy battle to quiet down anytime soon.

What are you excited or worried about in the world of technology this coming year? What do you think will be a big story in 2014?