These students reached the finals through a long process that began in October 2016 with over 130 teams submitting ideas to judges for Round 1.  Teams making it to Round 2 were submitted a business plan in February.  These were judged and semi-finalist teams were announced in mid-March.  Of these 20 semi-finalist teams, 8 included ESTEEM students.

On Thursday, April 20, the semi-final (Round 3) judging occured and the eight finalists were chosen.

These eight teams had the opportunity to pitch their business plan to a public audience on Friday, April 21, after which the awards were announced.  ESTEEM students were awarded the following: 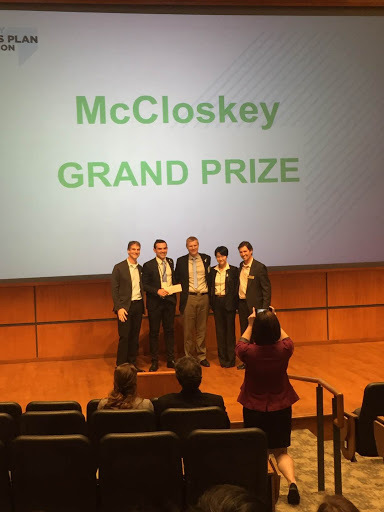 Finally, the 2016-2017 McCloskey Business Plan Competition Grand Prize was announced and this year, two teams share that honor -- one of which was Structured Immunity and ESTEEM Student David Hardwicke.