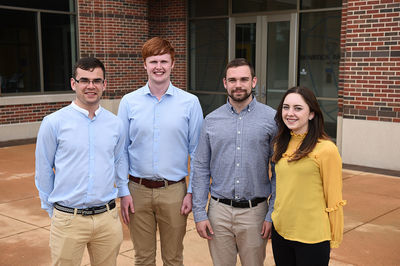 Four Naughton Fellows in the ESTEEM Class of 2018 are driving on a new side of the road, eating unfamiliar food, teaching their classmates what it really means to be Irish, and gaining the entrepreneurial skills they need to change the world. The group, who did not know each other in Ireland, form a critical cultural mass with earlier Irish students who have settled here.

“We have our own little pocket of Ireland here in the middle of South Bend,” says Sean Bolton. “It’s great to have a number of Irish people here. We’re always together.”

“The group came over together, which makes the settling-in process much easier,” added Cian O’Donnell. “You kind of inherit a group of friends automatically, which is very nice.”

Bolton, who grew up in County Clare on the island’s west side, started two companies while earning a degree in electronic and computer engineering at the National University of Ireland Galway – a job board website to help students find summer employment and, with a cousin, a service that provides strength and conditioning programs to people who can’t afford personal coaches.

“The entrepreneurial spirit was starting to grow in me,” he says, adding that friends in earlier ESTEEM classes recommended the program. “The thing that really appealed to me was that it wasn’t like a traditional MBA. It’s aimed at people with a technical background that want to learn the entrepreneurial skills required to take an idea to the marketplace. That was the appeal for me.”

Now he’s helping a leading manufacturer and designer of laser components find new markets for his products. “It’s great having an industry sponsor so prominent in the industry,” he says. “If I need anything, it’s made available to me.”

Tyron Pretorius, who earned a master’s degree in mechanical engineering in a five-year program at Trinity College in Dublin, as an undergraduate started developing solutions to help caregivers support dementia patients at home with a sensor system that alerted them when certain supplies were running low. He spent his fourth year designing electronics retail stores for 2025 that could lure digital natives to brick-and-mortar with fun and function. He realized he needed new skills when the ideas failed in business competitions. “I didn’t know how to make a proper marketing strategy or do financial forecasts,” he said. “A lot of the stuff I was doing looked very childish.” That’s when an alum told him about ESTEEM.

“I knew this is what I needed to do,” Pretorius said. “It teaches you how to commercialize ideas. I had the problem-solving ability. I could make the products. I could design them.” For his capstone, he’s working on how to replace barcodes on individual grocery products with Radio-frequency Identification (RFID), a more costly inventory system used in warehouses. It’s a descendant of his monitor-the-products project. A smart cart would log items as they were added, total the bill, and accept credit card payment without cashiers or checkout lines, offsetting the cost for grocers.

Cian O'Donnell, who earned a biochemistry degree at University College Cork, wanted to take the science beyond the lab. He participated in M.I.T.’s iGEM Competition, generating an organic biopolymer using bacterial cells, that led to a startup in a business accelerator program. “That exposure to the business side of science and how you can accelerate scientific discovery piqued my interest at an early stage,” he said. “I wanted to build a business acumen for myself to be able to bridge the gap between slow research that stays in the lab and bringing it to the people who need it. I tried to marry a bit of entrepreneurship and business with the technical education I was getting.”

Now, with the Indiana Biosciences Research Project, he’s developing an app to speed up the clinical trial process for drugs, collecting volumes of data by smartphone rather than monthly doctor visits, beginning with Parkinson’s disease. The technology can report the person’s gait while in their pocket, tremors while in their hands, and voice information when speaking into the microphone.

Alison Hennessy, who earned a degree in nanoscience at Trinity College Dublin with an Intel Women in Technology scholarship, including mentoring, support, networking, and a summer internship at the corporation’s manufacturing facility. As an undergraduate, she ran the Trinity Student Scientific Review, a new journal where she managed five editors and a design editor.

“This experience allowed me to draw on my scientific background, but there were these new skills I had never used before,” she says, including marketing, promotions, and soliciting articles, tripling the number of submissions. “I created this whole new system for the submission process. I loved running the journal because it exposed me to a wide variety of science. Growing something I could really be proud of was a huge thing.”

Hennessy sat in the front row and took copious notes when ESTEEM students introduced the program at a meeting last year. “I was interest in learning how the commercialization process works,” she says. “It has completely changed how I’m thinking. I’m here for a month, and I feel like a different person already. We get to hear so many incredible people talk.” She is working with Ratio Innovation Management of South Bend to set up a fusion of incubator, accelerator, and venture capital to study and solve energy industry problems. Hennessy’s interest in social entrepreneurship also has her working with the Venture Founders Program.

The Fellows marvel at the beauty, values, and resources of the Notre Dame campus, the wisdom and experience of their professors and guest speakers, and the camaraderie and support of their classmates.

“One thing I really admire about the college is their moral principles,” Pretorius says. “I know it’s a Catholic college, but you don’t have to be Catholic to appreciate the morals they have around the college. They keep saying to us that Notre Dame will be a force for positive social impact in the world. They keep pointing us in this direction. At the end of the day, they want our businesses to help people in the world. That’s a great goal that everyone in the class is trying to reach now. We have a lot of fun together as well. We’ll have a bit of a laugh. That makes the work more bearable when you have this support around you.”

“It’s a very nurturing ecosystem,” O’Donnell says. “The lecturers have been absolutely incredible and willing to help. They’re all the time looking for good speakers to get in front of us. They’ll pull out every single stop to get you in that interview room.”

“We came over here as a little family already,” agrees Hennessy, sometimes affectionally called the group’s “mother.” “It’s a very collaborative culture here. It feels very familyesque. I’m going to have an incredible skill set. I’m going to come out of ESTEEM with a mindset that I can do anything, that we can make an impact.”

“When you’re around my fellow classmates and everyone is bursting, full of energy and ideas, it’s a great environment to keep you on top of your game,” Bolton says. “Our course instructors’ industry experience is insane – 20 to 30 years in industry. They know exactly what happens. It’s not just something they read in a book. Then you have the social side of things, the football games. I never even watched a football game before I came over here, and we have a stadium on campus that’s bigger than any stadium in all of Ireland.”